How to Deal With a Break in a Relationship

Sometimes taking a break in your relationship may be the best solution. It gives you both the space you need to work through the problems that led to this.

A frequently asked question is: «Is a break in a relationship a helpful thing?» It can be beneficial. If the two of you are constantly arguing, then time apart might give you the time to think over and talk to friends and family. It's difficult to see solutions or accept any part of the blame when you're too close to the situation. So, removing yourself can provide the distance you need to see the bigger picture. Sometimes, taking a break can save a relationship. Though if you're cohabiting, this may be more difficult.

How do you take a break when you live together? Ideally, one of you will have somewhere else to go, even if it is just a temporary measure. It might involve leaving most of your belongings and just taking what you need for several days or weeks while you sleep on a friend's sofa.

Going on a break can stop problems from reaching the point where you say something you can't take back and make the conflict irreparable. You don’t have to be ashamed of backing off while seeking relationship advice from trustworthy friends or professionals. If you can't resolve your issues and find a solution, relationship counseling from an outside perspective might reveal something neither of you has considered nor weren't prepared to bring up.

It's important to be honest with each other. If you think there's a chance of getting back together after you've worked through the problems, make this clear. That way, neither of you should date other people. If you're looking for a softer version of breaking up permanently, it's unfair to give your partner false hope. Make a clean break and let them know this is permanent rather than a temporary measure. 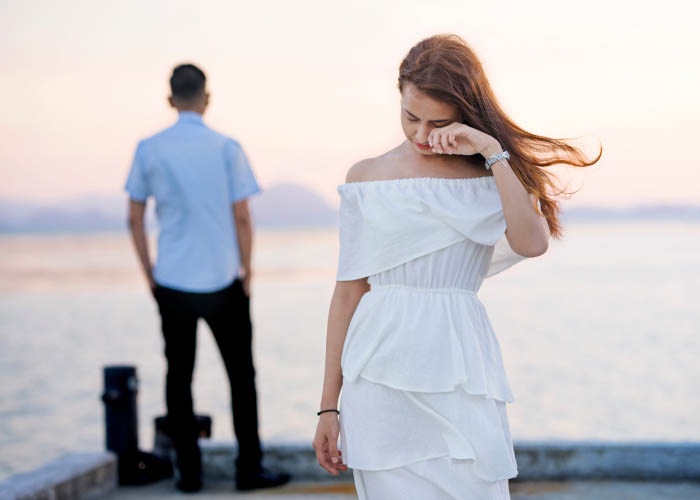 How to Know When It's Time to Break Up

A break will often give you a better idea of how you both feel about each other and the issues are worth resolving, or the break should turn into a break-up.

Some couples stay together or extend a break to months instead of weeks. Taking a break but still being together doesn't mean you can act like you're single. A break should be used to work on your problems. If you're asking yourself, do I need a break from my boyfriend, think about the reasons you want time apart. Do you think there is a solution to the issues? Are you willing to talk, even about the uncomfortable subjects that have led to this? How will the break work logistically?

Taking a break from marriage while living together can be difficult. You're not at the stage of seeking a divorce, and you've probably both paid towards the mortgage or might struggle to make the rent if one of you moves out temporarily and stops paying during that time.

You may have no choice but to take a break but still live together. If you're lucky enough to have a spare room, at least it gives you a separate space to sleep. Otherwise, one of you might have to sleep on the sofa, or turn another room into a bedroom for a short time, while you try to fix the problems.

Eventually, you'll need to know the best way to end a break with your beloved. It depends on whether you want to turn the break into a permanent break-up or get back together. If you haven't fixed the underlying issues, it probably won't be long before these resurface. Even if you have fixed them, it will be kind of starting again. You will still have your shared history and experience, but the early days of getting back together will involve getting used to each other again and rebuilding trust and feelings. It's unlikely you will be able to pick up exactly where you left off, and that can be a good thing, because you had the break for a reason.

If you're sure you want to end the relationship completely, you should explain it to your partner face-to-face. Don't tell them by message, phone call or any other way, except in person. If you can't work through differences and disagreements, breaking up may be the best option. Taking a break can leave you both in limbo, and this conversation could be a helpful impetus to make a choice and move on.

What to Do During a Break-Up

When going on a break in a relationship, there should be rules. It can prevent misunderstandings, while one of you starts dating other people and upsets the other one, who assumed you were technically still together but trying to work on the problems in the relationship. It's a good idea not to date other people. You should also talk about what each of you expects from the other if you get back together. If your partner can't provide this, use the break to think over how important these expectations are to you. Use the time apart to reflect and consider how both of you can forward, separately or together. Other rules should include not criticizing each other among friends and family or trying to score points and being honest. So, if you realize you want the break to become permanent, don't string them along.

If you decide to separate permanently, allow yourself time to enjoy being single, and even if you decide to remain friends, back off a little and give each other space. Changing from being in a relationship to becoming friends means the dynamics between you will be different.

Some people struggle with the question, how long should a break in a relationship last. While there is no specific time limit, and it will be individual for everyone, but some couples find it helpful to set a time frame. It doesn't mean you should expect things to be resolved either way by the end of this, but it allows you both to evaluate the break and any progress (or lack of progress) made.

A break can be useful in a relationship because it can show you how much you miss your beloved and strengthen your resolve to work on the problems. Alternatively, it can make you see how much happier you are without your partner and notice parts of your life which are better without him or her. By taking a break from your partner, you're not shutting the door completely but giving each other space to decide the best option.

Time apart from a relationship will either strengthen it or confirm it's over. Whatever the result, both of you will be able to move forward with your own lives.

Being on a Break in a Relationship Rules

Some specific rules for going on a break in a relationship could include:

There is no universal answer to the question of whether taking a break is good. At that point, it may not seem like a good idea to do. But still, when you look back, you might see how it helped. Taking time apart can either strengthen the relationship or confirm it's over.

Sign up for free!
More articles
Browse popular articles
Author: Jennifer Lorusso
Jennifer Lorusso is a recognized dating and interpersonal relationship expert. As a woman with Psychological degree, she utilizes both her whole life training and her incredible life experiences to serve her readers. She is known for her approachable manner and empathetic abilities. She trully believes that everyone can find true love as long as they believe it is available to them.
Home Dating Tips How to Deal with a Break in a Relationship